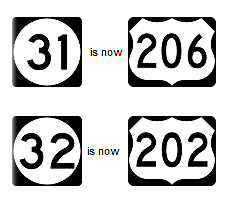 Here are the signs!

Travel back to 1935 and you definitely would have been.

As local maps were showing back in 1935, Route 32 started basically at what locals know as Willie’s Tavern in Bedminster and heads Northeast towards Bernardsville.

In 1966, the Tri-State Transportation Commission first proposed a US 202 Freeway through central New Jersey. That year, in its report Transportation 1985: A Regional Plan, the Commission stated its case for a freeway to fill the gap between I-78 and I-95, as well as to provide a connection to a proposed US 202 Expressway in Pennsylvania: This east-west route through Somerset and Hunterdon counties will fill the needs of the area between I-78 and I-95. It will connect with the proposed Piedmont Expressway (US 202) in Pennsylvania.

What other names were given to the local road that’s called Route 202 or Route 206?

Route 202 is a highway stretching from Delaware to Maine, also passing through the states of Pennsylvania, New Jersey, New York, Connecticut, Massachusetts, and New Hampshire.

PLANNED AS A PARKWAY: In 1932, the Regional Planning Federation (the predecessor agency to the Delaware Valley Regional Planning Commission) proposed a parkway system around the Philadelphia area similar to that constructed by Robert Moses. Borrowing from the Moses design conventions, the four-lane parkways were to feature controlled access, stone-arch bridges, timber light posts and natural vegetation. One such parkway was to be constructed along the present US 202 corridor through Pennsylvania into New Jersey. In New Jersey, the parkway was to connect to another parkway along the current NJ 29 corridor. It is not known if the proposed parkway was to continue north along US 202 into New York State.

US 202 runs southwest-northeast through the northwest part of the state. It was formed in the mid-1930s as a renumbering and extension of US 122 (connecting with US 202 from Maine southward once New York agreed to sign it). Before the GR, US 202 used pieces of 29, 30 (the current multiplex with 31), and 31 (the current multiplex with US 206), all of 32, and a piece of 23, as well as county roads from there north. The history of US 202 is contained in all of the links in this paragraph.
Lambertville and Ringoes were bypassed by a freeway on 10/16/1974; the old route became 179.

The road has borne the number 202 since at least 1935. Prior to this, sections of the road were designated U.S. Route 122, as it intersected U.S. Route 22. Its current designation is based on its intersection with US 2 in Maine.