It was back in December 2007 when George Washington’s Society of the Cincinnati medal was auctioned off at Sotheby’s for a whopping $5,305,000. Founded by General Washington and other officers of the Continental and French armies who served in the American Revolution, the Society of the Cincinnati is the oldest and most prestigious of America’s many hereditary societies. However, the Society was not one of the favorites of the American Congress.

Louis XVI was himself a member, and the Society was known as the ordre de Cincinnatus in France, where it was added to the hierarchy of orders (even though it was not, strictly speaking, an order) as ranking just below the Order of Saint Louis. General Washington’s Cincinnati badge was, after his death, given to the Marquis de Lafayette whose descendants kept it in the family until the auction last December. 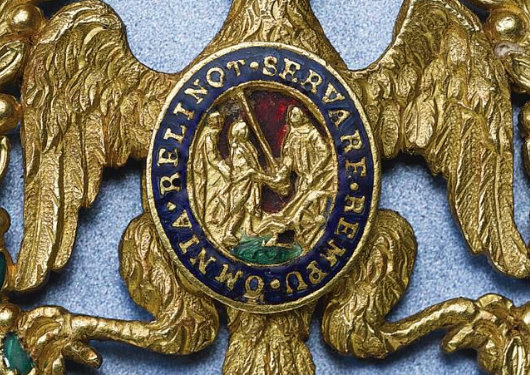 The design of the Society’s eagle is by Pierre Charles L’Enfant, the master planner of Washington, D.C., and this particular medal is believed to have been crafted out of gold and enamel by Duval and Francastel of Paris sometime between December 1783 and April 1784. The motto ringing the oval medallion on the eagle’s chest reads OMNIA • RELINQT • SERVARE • REMPU — an abbreviation of Omnia Reliquit Servare Republicam, “He left everything to serve the republic”, referring to Cincinnatus himself, whom the members of the Society considered worthy of emulation. In the center of the oval, two Roman senators present a sword to Cincinnatus, who stands by his plow. 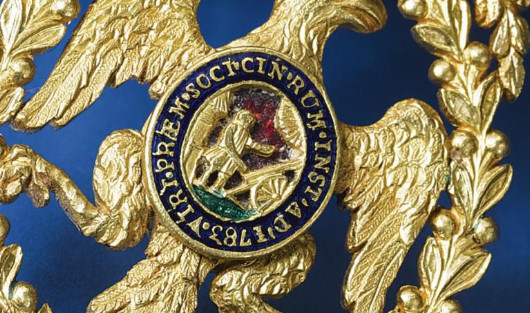 The text on the reverse side of the badge reads VIRT • PRÆM • SOCI • CIN • RUM • INST • AD • 1783 — an abbreviation of Virtutis Præmium Societas Cincinnatorum Instituta Anno Domini 1783, “Reward of Valor of the Society of the Cincinnati, Founded in the Year of Our Lord 1783″. On this side, the central image depicts Cincinnatus beside his plow and his home with the sun rising in the sky.

The medal was presented to General Washington and held to his death, when it was inherited by his wife Martha. On Martha Custis Washington’s death in 1802, it was inherited by President Washington’s adopted daughter Eleanor Parke Custis Lewis. When the Marquis de Lafayette made his famous return visit to America in 1824, Nellie Lewis presented him the medal as a gift. It then remained in the Marquis’s family until his great-great-great-grandson put it up for auction last year.

Old badges of the Society are much sought after by special collectors, and a number are held by museums and other institutions. The United States Military Academy at West Point has in its collection a Cincinatti badge (picture below) made in Philadelphia c. 1815–1820 by the famed silversmiths Thomas Fletcher and Sidney Gardiner. 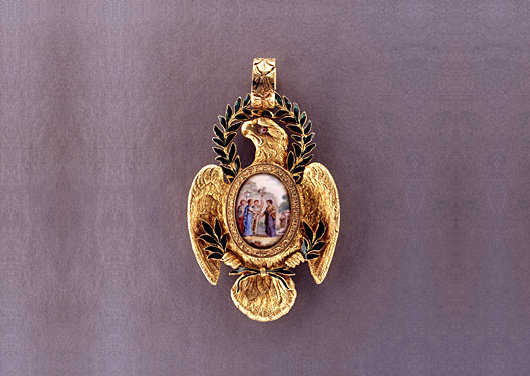 Other Society of the Cincinnati Medals

There are several variations of Orders of the Society of the Cincinnati that were actually made in the 1780s, and there are many variations of ones that have been made between then and the present. At this society’s headquarters in Washington, there are two other unusually valuable Orders. One is worn by the President-General of the society for certain occasions. It contains diamonds and rubies. Originally, it was given to Washington by officers of the French navy, according to the Sotheby’s catalogue. Another Order (medal) was made in 1832 or so, using the Washington-Lafayette Order as a model, and is also in the possession of the Society in Washington. It is sometimes referred to as a ‘copy’ of the Washington-Lafayette Order, though, in actuality, it appears markedly different.

The Order (medal) that sold for $5.3 million on Dec. 11 was specially made for George Washington in 1784 and, for it, Washington had to pay three times the price of the Orders (medals) that were available to other American and French officers who fought for American Independence. Washington was the first President-General of the Society of the Cincinnati. As an Order (medal) that was manufactured in 1784 specifically for Washington, this Order (medal) is unique. It is true that other Cincinnati Orders, made in 1784, have sold, over the last several years, for less than $50,000 each, maybe even for less than $10,000. Of course, in numismatics, a slightly different item may be worth many multiples of an item that looks the same to someone who is not familiar with the pertinent details.

The medal above was one of three eagles known to have been owned by Washington. Washington most commonly wore the “diamond eagle,” a diamond-encrusted design that was given to him by the French matelots (sailors). This diamond eagle continues to be passed down to each President General of the Society of the Cincinnati as part of his induction into office.

Henry Knox’s Medal – showing the unique differences between this one and Washington’s medal. (Owned by the General Henry Knox Museum, Thomaston, ME)

Andrew Cusack and others who contributed to this piece.

Click Here to learn more about the Society and it’s medal recipients.

One Thought to “George Washington’s Society of the Cincinnati Medal Sells for $5.3million”